It’s a common misconception that “picks are picks”. Some people will tell you that it doesn’t matter what you use. The truth of the matter is a little more complicated, yet it is pretty easy to explain what the best picks for Metal are.

If you want to play metal, you need a pick that can help you play fast and precisely. Not all picks are designed the same. I’ve been playing for close to 20 years, professionally, and my go-to pick for the last decade has been the Dunlop Jazz III – it is a near-perfect pick for metal and rock.

The Best Pick For Metal Perfect for metal and favored by the pros, the Dunlop Jazz III picks are about as good as it gets for accuracy, comfort, and durability.

I do have other favorites that I have used over the years, picks like the Fender 351 Heavy and the Ernie Ball Prodigy, but the overall best for speed, accuracy, and grip is Dunlop’s Jazz III – for me, nothing else comes close to how good this particular pick is for metal and rock music.

If you want to play metal, you need a few things from a pick. You need it to be precise, have a great attack, and you need it to be comfortable whilst having plenty of grip – this is super important.

Whether you’re playing live or practicing in your room, choosing the right guitar pick will make ALL the difference. I’ve been playing guitar – in bands, in the studio, and live – for almost three decades now.

But with age comes experience, and in my experience, the following guitar picks are the best options for playing metal and hard rock music – both in the studio, live, and for when you’re practicing at home.

The Best Pick For Metal

Perfect for metal and favored by the pros, the Dunlop Jazz III picks are about as good as it gets for accuracy, comfort, and durability. 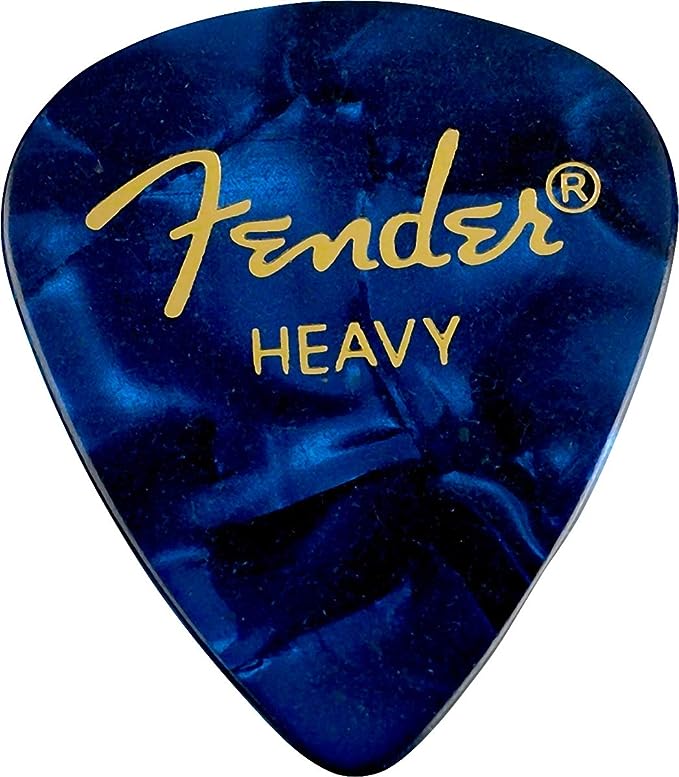 The Fender 351 Heavy really took off as a great pick for Metal guitar in the 1980's. Many of the Shredder Guitarists of that era used the 351 Heavy because of its thickness. 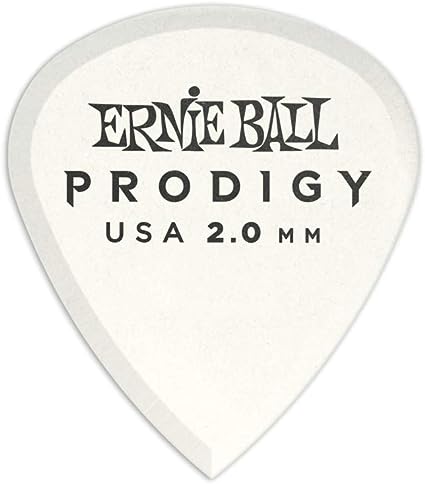 The Prodigy is the newest on our list of picks and is a direct response to the Jazz III. It is tailored towards metal players and has different shapes to accommodate any style of playing. 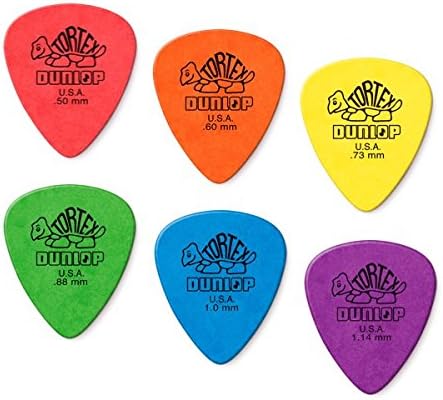 The Dunlop Tortex is another classic choice that still sells like hotcakes today. The .88mm and the 1.0mm picks were made popular in the 80’s and were used by some big names. Some people would say the biggest names, since Metallica endorsed them for years!

How Pick Choice Makes A Difference

There are tons of different picks out there and they all have a different application. You’ll find that picks come in all shapes and sizes. But why?

Most metal guitarists try out a ton of picks in the beginning. I know I did!

But finally you find one or two that work for you. Just like James Hetfield did with his current guitar picks.

Your favorite guitarists went through the same process at one point, and they found the perfect picks too.

And a good pick, combined with great technique, and a solid understanding of chord voicing and extensions is a surefire way to seriously up your playing.

Some guitarists prefer a larger pick to get a better grip while some prefer the smaller picks for the same reason! There is no right or wrong answer since we all play the guitar differently.

But if you’re thinking about recording at home, you’ll want a pick that works for you – no one likes sloppy takes, after all!

But there is a bit of science to choosing a pick, and the most important thing is how hard you strike the string. This is called “Pick Attack”.

What Is Pick Attack?

Pick attack is all about how you have personalized your right hand technique. Some players strike the strings lightly. This is called having a “light touch”.

Other players use their picking hand in a more percussive manner. We call these players “heavy handed”.

No matter which group you fit into, or if you are somewhere in between, there is a perfect pick for you.

Certain artists swear by their pick choices as passionately as they talk about their guitar choices. Lets talk about what makes a great pick when it comes to Metal guitar playing, and why they are so popular.

The Dunlop Jazz III has been around for a long time and has been used by many famous guitarists. But it wasn’t always used for Metal guitar. It’s popularity began with it’s namesake.

But it wasn’t long before the Dunlop Jazz III made it’s way into the Metal Community. But what makes it one of the best picks for metal? It has a ton of advantages for a Metal player.

Dunlop is a leader in guitar accessories for a good reason. They make great products. The Jazz III has been popular for Metal guitar lately. There are a ton of classics as well!

You wouldn’t think that Fender would be on a best picks for metal list, but they are actually pretty popular! The Fender 351 shape has been around for a long time. The 351 Heavy has been a staple of Metal and Hard Rock since the genre’s inceptions.

The Fender 351 Heavy really took off as a great pick for Metal guitar in the 1980’s. Many of the Shredder Guitarists of that era used the 351 Heavy because of it’s thickness.

While it is an older pick, it is still used today by plenty of guitarists looking for a regular-sized pick. They come in three thickness options with the “Heavy” being the most popular for metal.

The Fender 351 is a classic pick that is still a great option for any guitarist looking for a heavy pick for Metal riffing.

Ernie Ball is no stranger to guitar accessories. The company started in the late 70’s and has created many brands including the now legendary “Music Man” guitars. But they are just as well known for their accessories and strings.

The Prodigy is the newest on our list of picks and is a direct response to the Jazz III. It is tailored towards metal players and has different shapes to accommodate any style of playing.

The Prodigy picks may be new, but they are made by one of the best companies, and they are sure to take off! I have had the opportunity to use them personally and I prefer them to the smaller, Jazz III picks. Their size makes them one of the best picks for metal, for me.

The Dunlop Tortex is another classic choice that still sells like hotcakes today. The .88mm and the 1.0mm picks were made popular in the ’80s and were used by some big names. Some people would say the biggest names since Metallica endorsed them for years!

The Totex line became so popular because they were the first pick to have a coating applied in the factory. When you receive your package of Tortex picks, they have a chalky coating that helps with grip. It’s easy to see why players focused on speed and precision would choose them.

While they are not as popular as they once were, Dunlop still sells a ton of these. They even revamped the Tortex in 2012 to have more grip, and appeal to a new generation.

Dunlop must be doing something right to take two spots on our list of best picks for metal!

Gravity Picks is a newcomer to the game, but they are so cool and versatile that I had to add them to the list. You see these promoted by many YouTube shredders. I was introduced to them by Rob Chapman, of Chapman Guitars.

Gravity Picks are hand-made in the USA and have more features than any pick I have ever seen! They have loads of shapes, sizes, and different acrylic grips. Their claim to fame is their designs and materials.

Their picks also have longevity. The materials they use can stand the test of time. New picks come with a beveled edge, that feels “worn in” and mimics a well-used guitar pick.

Gravity Picks are only hindered in my opinion by their price. These are not cheap picks that you throw into the crowd at the end of a set. But you get what you pay for; and in Gravity’s case, it’s luxury and longevity.

Gravity may be new, but they have definitely found a spot among the best picks for metal. You can check out all of their designs at Their Official Site.

It is easy to be overwhelmed by all the choices out there for guitar picks. If you are a beginner then you probably haven’t spent much time wondering about picks. The best way to find the right one for you is to get out there and try them!

Or maybe you’ve been using the same picks for the last decade. It could be time to try something new! The companies on this list are ever-evolving and constantly being innovative. Just like your own playing!

A couple of times a year, I like to try something new because you never know what may help you with your own style. Sometimes, it is easy to overlook something like what kind of picks you use. Seems trivial, doesn’t it?

But different picks can change the way you play. They can even change your tone, depending on the material. Everyone wants to play faster, heavier, and more accurately. A different pick may be the key to your transformation.

Are thicker picks best for metal?

Most Metal players seem to like thicker picks because you have more control over the pick attack when playing fast.

Some players like a smaller pick for palm muting, as it gives your fingers more control.